And here we are at the end.

We learned some lessons: Flying cheap can make for a super horrible travel time. In the end we didn’t save any money, still sat on planes for a long time, and had an added delay in one of our flights. We won’t make this mistake again!

I think the Model Y is a great niche filler for Tesla to get out the door and produced. Elon Musk stated that it will outsell the S, 3, and X combined and I believe that. The number of posts on Facebook of people adding a screenshot of their final order pages was a huge surprise for me.

Many Americans love, and want, a more upright seating position in their vehicles and the potential, larger, storage in the rear area is great. Exactly how much storage is still unknown as we were not allowed to open the hatch nor could we crawl around any car.

Performance of the dual motor version was what I expected especially with 5 adults in the car. The turning radius was on-par with the current 3 as well. This is a good thing as according to engineers I talked to, and the driver of our demo, 75% of the car comes directly from the Model 3. This includes motors, battery, lower support frame, etc. The changes in the body are the items that really differentiate the look of the vehicle. I wonder what the frunk will look like. Will it be deeper like the S and X? Will the hatch in the back offer better storage space than the 3 with its trunk?

There was some non-functional items in the car we had a test ride in as coat hooks and interior lighting were non-operational. The 3rd row of seating looked very cramped as the 2nd row as far back as possible.

The blue you see in the pictures may look off but it is the current Tesla blue we have seen on the cars since 2016. There was a backdrop picture during the event (watch the reveal on YouTube) where there is a slightly different shade of blue on the Y but I don’t know if that was a lighting issue or something else.

We got to Hawthorne very early and walked a ton. It was beautiful out and quite enjoyable. We got home sore and tired and yet very happy to have gone on our adventure.

In closing: I would do this again and if you have an invite for the reveal for the Tesla Truck then think of me. I’ll be here. And I’d make the trip again.

And we got to meet Franz on the way out 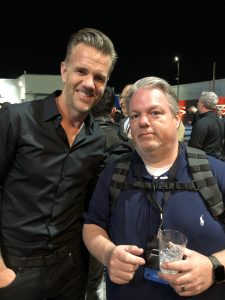 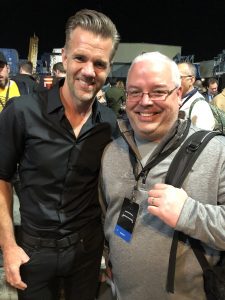 Now if only we could figure out what this is..