Finding usage of specific IPs behind your Fortigate firewall is easily done using Sumo Logic and a dashboard or scheduled search result.

Which results in the following output: 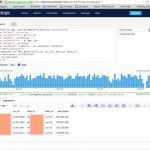